If you’re going to a Flying Lotus show don’t expect to spend your night watching a guy stand behind his laptop all night. Grammy nominated electronic producer Flying Lotus has built his legacy beyond music through use of powerful visuals, and in his latest attempt to make these two a more fluid, singular experience Steven Ellison (FlyLo) breaks the 4th wall once and for all with a little help from 3D Live.

This past summer Ellison wanted to introduce an all-new immersive, full-blown 3-D experience to his North American tour. Set to debut at FYF Fest in late July, the team came to Thunder Studios to do a test run.

Enter: Ryan Pardeiro and his 3D Live team. “We got introduced through a mutual friend,” says Ryan, Chief Operating Officer & co-founder of the Los Angeles-based company that designs and manufactures hardware for 3D entertainment purposes in an  article by Forbes. At the VRLA convention, 3D Live had a mixed-reality installation involving a DJ and virtual reality software TheWave that seemed right up Ellison’s alley.

LA Times says of the experience festival attendees had, “with the glasses on, the audience saw laser fans sweeping out overhead like a false ceiling. Sleek digital objects popped out of nowhere to tower over his gear rig. Fields of stars blossomed behind him, making it look like Lotus was performing before infinite depths.” An unforgettable, one of a kind, multi-sensory experience to say the least.

For those who couldn’t make it to a FlyLo set for this seemingly once in a lifetime encounter and may currently be experiencing major FOMO, fret not. Pardeiro of 3D Live says of Flying Lotus shows to come in a recent Forbes article, “No show is the same: he doesn’t always play the same songs and we don’t play the same visuals. We’re all working together in an improvisational way with each show” (Forbes). 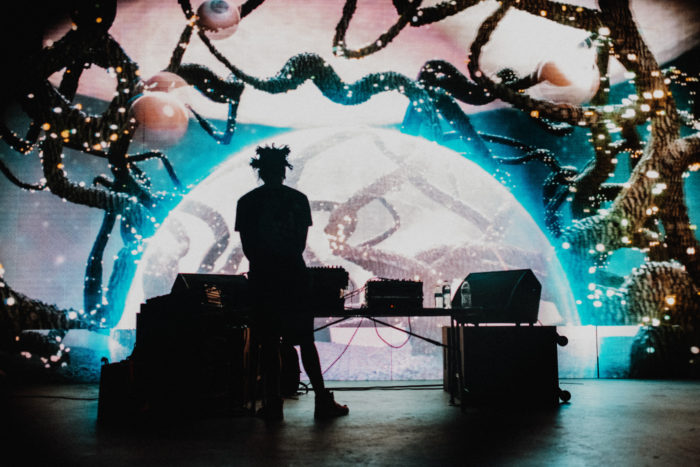