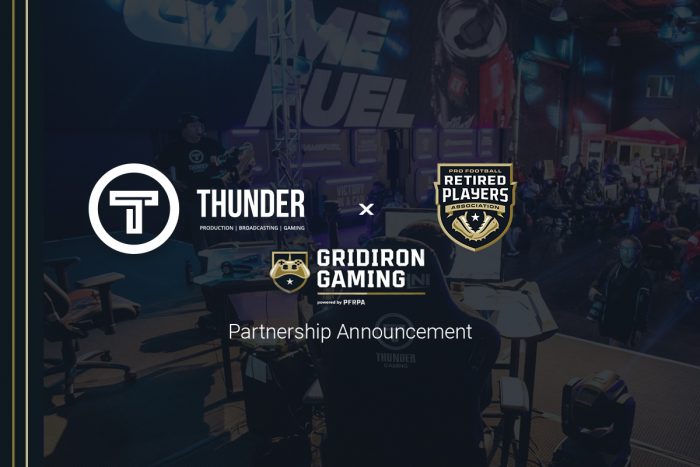 “We’re not only impressed with Thunder Studios’ esports tournament and production expertise, we are also appreciative of their drive and passion, all of which make them an ideal partner,” said Bob Schmidt, executive director/CEO of PFRPA. “We’re in an era where both live and digital engagements have become more prominent and meaningful when strategically executed in concert, so we’re committed to developing highly entertaining esports content while delivering truly worthwhile live and virtual events.”

Thunder Studios plans to establish a Gridiron Gaming tournament series, featuring online and physical events that will be broadcast live on Twitch to a global audience. Each round of the tournament series will feature cash prize pools for the finalists, and will conclude with a championship event where finalists will have the opportunity to battle it out for a sizable grand prize.

“The PFRPA and its membership extoll the greatest life virtues necessary to overcome adversity, commit to perseverance and excel in your focused endeavors. Thunder is excited to collaborate with the PFRPA and produce live esports events and original programming using these virtues to bridge generations through the Gridiron Gaming initiative,” said Rodric David, CEO of Thunder. “In the coming weeks, we’ll announce the specifics of our tournament series, which will exceed more than 100 hours of live event competition and programming.”

Gridiron Gaming is PFRPA’s esports initiative that provides retired players an opportunity to compete again, while offering fans a chance to engage with their NFL heroes. PFRPA’s partnership with Thunder Studios will also forge new paths in the esports industry, by connecting fans to retired NFL players, through original programming and interactive experiences.

“This partnership with Thunder is exciting,” said Mike Singletary, NFL Hall of Famer and PFRPA Board Member. “I’ve had the opportunity to play against a younger generation of esports athletes, and I was enlightened and pleasantly surprised by the experience, and how competing in a new way made me feel. Our Gridiron Gaming initiative presents opportunities for different generations to connect and have a good time, so I’m looking forward to getting this collaboration underway.”

About Pro Football Retired Players Association (PFRPA) PFRPA is a champion for retired NFL players, dedicated to bettering the lives of those who contributed to the game. PFRPA, the first court-established retired NFL player organization, through its leadership and dedication, has been on a mission to solidify and preserve the legacy of retired NFL players. Through the Greater Good Fund, PFRPA’s 501(c)(3) charitable foundation, PFRPA develops various health and welfare programs, designed exclusively for retired NFL players. To date, more than 10,000 retired players and more than 2,500 players’ spouses have enrolled in PFRPA insurance benefits. For more information about PFRPA, visit www.pfrpa.com.

About Thunder Studios Based in Long Beach, California, Thunder Studios is a vertically integrated, full-service broadcast production studio with a focus on esports, gaming events and programming that has developed and patented proprietary streaming technology. The Company works with the world’s best talent in all content formats. Thunder’s 150,000 square-foot Media Campus houses 10 Stages, an esports arena, 2 streaming stages, a live news broadcast stage, production offices, edit bays and equipment storage. The Company’s mobile broadcasting business captures, produces and distributes live events throughout the USA and Mexico, including Baseball, Soccer, Boxing, Wrestling, MMA, esports, concerts, awards shows, corporate events and live streaming of anything. Esports and Gaming is Thunder’s passion and the Company produces and broadcasts live gaming events every week from its esports arena. The Company believes that within the next few years, gaming and esports viewership will be the largest content format on the planet and Thunder sees its opportunity to be a leading global broadcaster distributing and monetizing gaming content to a worldwide audience. www.thundergaming.com thunderstudios.com www.thunderbroadcast.com